After literally a few years of searching, I finally found enough information to write a post about Jesus Christ's post-mortal appearances to Prophets and Apostles in the dispensation of the fulness of times (see Ephesians 1:10). I will cite instances of a few appearances to Prophets and Apostles except for Joseph Smith, because I assume most visitors to this site know of his many visions of Messiah. Here goes nothing! 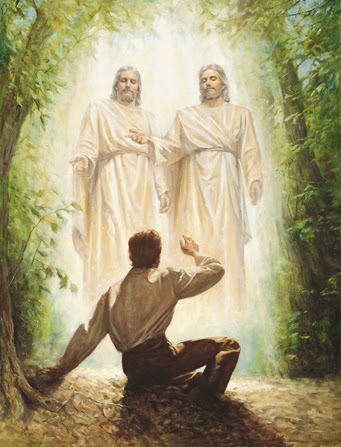 I will go in order, from earliest ordination date to the Apostleship to latest date of ordination thereto. The appearances of Christ, as He appeared to His servants the Prophets anciently, in modern times are both in revelatory dreams and in daylight visions; both will be represented here.

President Wilford Woodruff
At the dedication of the Salt Lake Temple in April of 1893, Woodruff stated, "Our Savior had appeard unto [me] in the East Room in the Holy of Holies, & told [me] that He had accepted of the Temple & of the dedication services, & that the Lord forgave us His Saints who had assisted in any manner towards the erection and completion of the Temple."[1]

President Lorenzo Snow
This is a more-well known account, which occurred in the House of the Lord at Salt Lake City immediately after the death of Woodruff. President Snow said that "the Lord Jesus Christ appeared to me at the time of the death of President Woodruff. He instructed me to go right ahead and reorganize the First Presidency of the Church at once and not wait as had been done after the death of the previous presidents."[2]

President George Q. Cannon
This experience also occurred during the almost month-long dedication of the House of the Lord in 1893. President Cannon said, "My mind has been rapt in vision and have saw [sic] the bea[u]ties and Glory of God. I have saw [sic] and conversed with the Savior face to face."[3]

Elder Orson F. Whitney
Elder Whitney was ordained an Apostle in 1906, along with David O. McKay and George F. Richards. His experience happened while he was on his first mission as a youth. He recollected, "One night I dreamed … that I was in the Garden of Gethsemane, a witness of the Savior’s agony. . . . As He prayed the tears streamed down His face, which was [turned] toward me. . . . Three times this happened, until I was perfectly familiar with His appearance—face, form, and movements. He was of noble stature and of majestic mien . . . the very God that He was and is, yet as meek and lowly as a little child. . . . I could endure it no longer. I ran from behind the tree, fell at His feet, clasped Him around the knees, and begged Him to take me with Him. I shall never forget the kind and gentle manner in which He stooped and raised me up and embraced me. It was so vivid, so real that I felt the very warmth of His bosom against which I rested."

Elder Melvin J. Ballard
Elder Melvin J. Ballard was ordained an Apostle in 1919, serving until 1939. Incidentally, he is the grandfather and namesake of current LDS Apostle M. Russell Ballard. Elder Melvin Ballard had this vision while he was a Mission President in Portland, Oregon, shortly before his ordination to the Apostleship. He remembered, "'I saw, seated on a raised platform, the most glorious Being my eyes have ever beheld or that I ever conceived existed in all the eternal worlds. As I approached to be introduced, He arose and stepped towards me with extended arms, and He smiled as He softly spoke my name. If I shall live to be a million years old, I shall never forget that smile. He took me into his arms and kissed me, pressed me to His bosom, and blessed me, until the marrow of my bones seemed to melt! When He had finished, I fell at His feet, and, as I bathed them with my tears and kisses, I saw the prints of the nails in the feet of the Redeemer of the world. The feeling that I had in the presence of Him who hath all things in His hands, to have His love, His affection, and His blessing was such that if I ever can receive that of which I had but a foretaste, I would give all that I am, all that I ever hope to be, to feel what I then felt!' (quoted by Bryant S. Hinckley, in Sermons and Missionary Service of Melvin J. Ballard [1949], 156)."

Elder David B. Haight
This is the most recent, given in a 1989 General Conference talk, wherein the Apostle recollected his comatose-induced vision he had after a heart attack. Elder Haight said, "I was shown a panoramic view of His earthly ministry: His baptism, His teaching, His healing the sick and lame, the mock trial, His crucifixion, His resurrection and ascension. There followed scenes of His earthly ministry to my mind in impressive detail, confirming scriptural eyewitness accounts. . . . I was given, by the gift and power of the Holy Ghost, a more perfect knowledge of His mission. . . . I cannot begin to convey to you the deep impact that these scenes have confirmed upon my soul."

I hope this information is helpful in helping you understand the true meaning of what it means to be an Apostle of the Lord Jesus Christ.

These accounts make the heart glad.

In the April 2014 General Conference Boyd K Packer said, "'And now, after the many testimonies which have been given of him, this is the testimony, last of all, which we give of him: That he lives! For we saw him'(D&C 76:22–23).Their words are my words."

I find it interesting that he quoted only part of verse 23, as he could have quoted the entire verse or just left it out.

I hope these help:

"In conclusion, please be assured that senior Church leaders who preside over the divinely appointed purposes of the Church receive divine assistance. This guidance comes from the Spirit and sometimes directly from the Savior. Both kinds of spiritual guidance are given. I am grateful to have received such assistance."

"We do not talk of those sacred interviews that qualify the servants of the Lord to bear a special witness of Him, for we have been commanded not to do so. But we are free, indeed, we are obliged, to bear that special witness."

"I declare to you that I know that Jesus is the Christ. I know that He lives. He was born in the meridian of time. He taught His gospel, was tried, was crucified. He rose on the third day. He was the first fruits of the resurrection. He has a body of flesh and bone. Of this I bear testimony. Of Him I am a witness.”

"Why don’t our talks in general conference and local meetings say more about the miracles we have seen? Most of the miracles we experience are not to be shared. Consistent with the teachings of the scriptures, we hold them sacred and share them only when the Spirit prompts us to do so…In bearing testimonies and in our public addresses we rarely mention our most miraculous experiences, and we rarely rely on signs that the gospel is true. We usually just affirm our testimony of the truthfulness of the restored gospel and give few details on how we obtained it."

"I don’t know just how to answer people when they ask the question, ‘Have you seen the Lord?’ I think that the witness that I have and the witness that each of us [apostles] has, and the details of how it came, are too sacred to tell. I have never told anybody some of the experiences I have had, not even my wife. I know that God lives. I not only know that he lives, but I know him."

"Our Savior had appeard unto [me] in the East Room in the Holy of Holies, & told [me] that He had accepted of the Temple & of the dedication services, & that the Lord forgave us His Saints who had assisted in any manner towards the erection and completion of the Temple."

"I know that Jesus lives; for I have seen Him."

"I know that God lives. I know that Jesus Christ lives,” said John Taylor, my predecessor, “for I have seen him.” I bear this testimony to you brethren in the name of Jesus Christ. Amen."